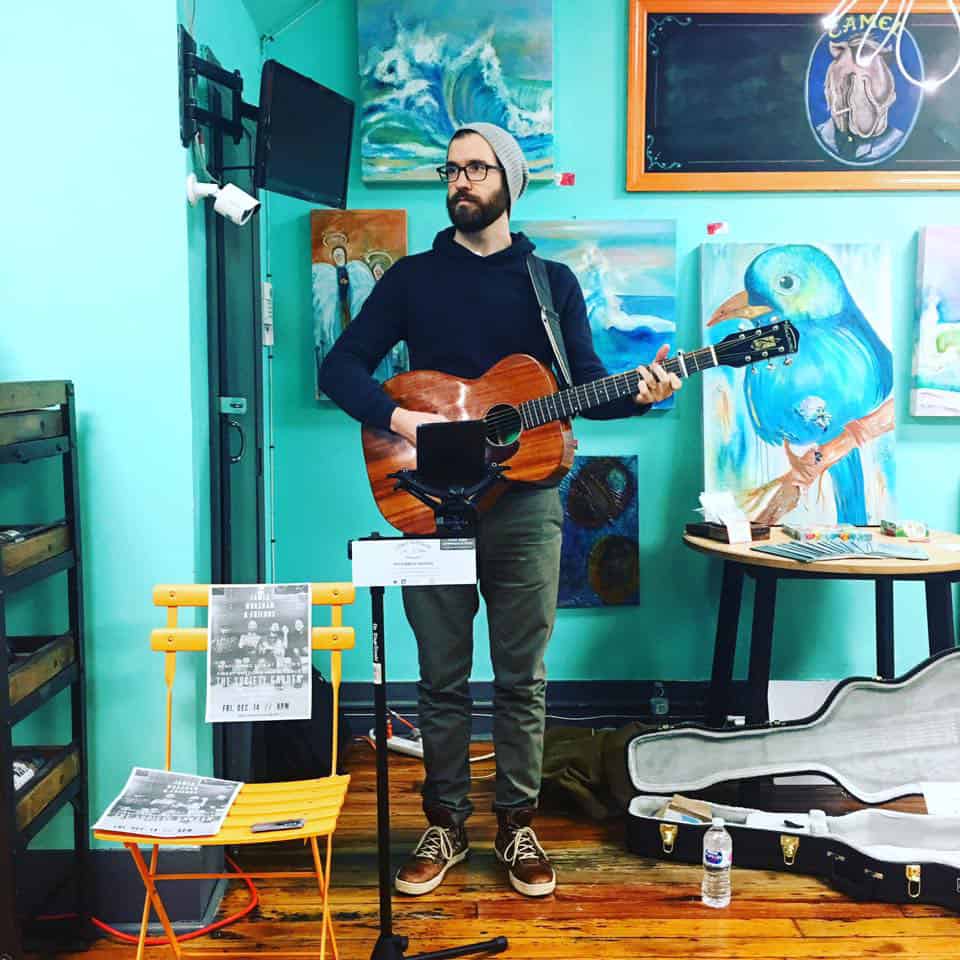 “I wholeheartedly want to believe that there are members of this community who care about the progression of the culture more than the one musical moment that we are continually reliving,” said Denny Hanson.

Hanson, now 32, started playing piano at age 5. He’s a multitalented multi-instrumentalist who has been a part of many bands, most notably his main project Nomenclature, which put out a beautiful record, “Tyrannus,” at the end of 2018. Hanson has worked as an audio engineer at Hargray Capitol Theater since 2016 and has been an active, integral, wildly creative presence in Macon’s music scene since his teenage years. 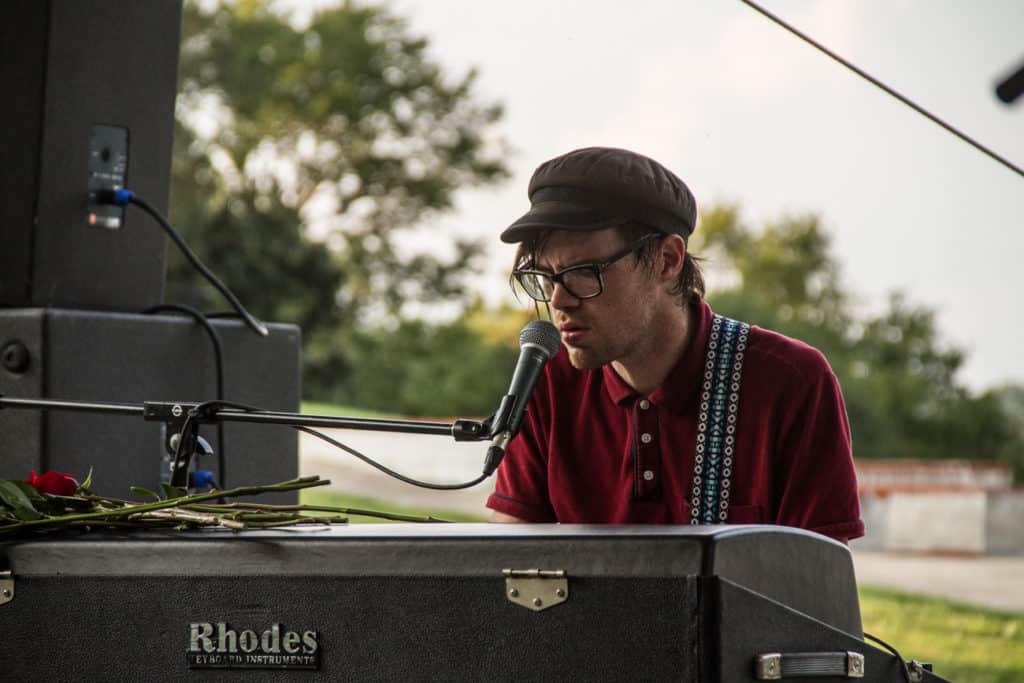 And we’re losing him to Nashville. He’ll be doing sound engineering there, at revered music venues The Basement/The Basement East. He’s already started work on his next full-length record.

“It’s extremely difficult and, speaking as an artist, extremely frustrating to feel like you’ve spent years cultivating your voice, finding yourself, going through darkness, finding the light, having all that witnessed by members of the community, making art about it – and still, people would rather hear the same old thing,” Hanson said. “It’s hard not to internalize. When you put yourself out there continually, and you feel rejected, eventually you stop. Or, you go somewhere else and try your music there. And that’s the exact opposite of what this community supposedly is trying to do.”

Hanson isn’t alone in his observations. James Worsham, an ex-worship pastor and former Christian heavy metal band member turned singer-songwriter, hails from Texas. He married Jen, a native Maconite, and they settled down here after their first child was born.

Worsham, grateful to have found a renewed well of creative inspiration, said, “I’m inspired by authenticity. I get pretty worn-down by how generic and fake so much of what we make and consume can be, but I love hearing stories of real people genuinely caring for each other and making positive contributions.”

“Brad (Evans) was the first guy in town to give me a shot, and now I play (at the Garden) pretty often. That place just has a great vibe,” he said. “I love that there’s kids running around having a good time while the adults can hang out and have a beer.” 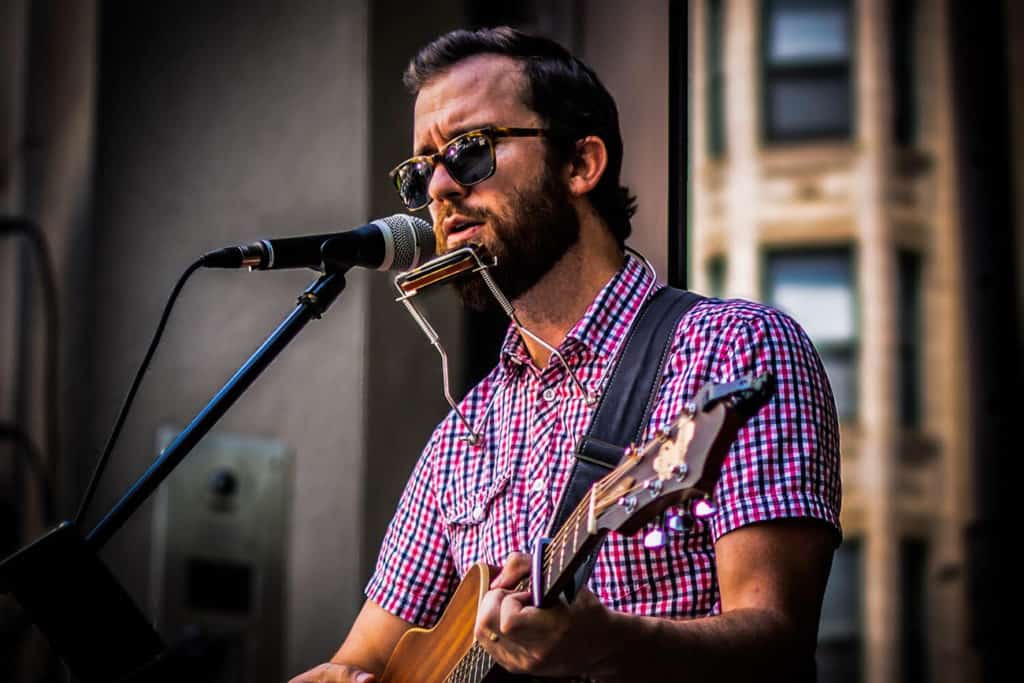 Worsham has enjoyed soaking in Macon’s musical history. Taking a Rock Candy Tour when he first moved to town opened his eyes to the depth and breadth of our past; but he, too, notices that sometimes we tend to get stuck on stories of our icons, to the detriment of our existing original artists.

“There’s not a lot of momentum here when it comes to original music,” Worsham said. “I feel like Macon could learn from a town like Memphis – celebrate and cherish the history while supporting the musicians working now. Songwriters and musicians almost seem like background music for people drinking in bars, and I can remember some of the most powerful moments of my life have been at shows where bands were playing their original material. The industry and our society have changed so much, though. It can be tough to find your place.”

Local news personality Amyre Makupson took note of Worsham as he played outside Travis Jean one First Friday. Intrigued, she invited him to play a few songs and discuss his experiences as a newcomer to the scene on the “Macon Music” show she co-hosts with percussionist, producer and Macon Pops founder Steve Moretti. “Macon Music” is a fledgling production with goals to generate awareness of and support for local musicians and to create a platform for artists to perform their music on air.

As the show grows its audience, the dream, according to Moretti, would be a segment with artists performing for a live studio audience on 13WMAZ.

“Eventually bimonthly – maybe even once a week,” Moretti said. “At this point, I’d be happy with once a month, though.”

Add Moretti’s voice to the chorus urging our city to work harder at looking toward our musical future.

“We have a rich music history and we need to support that, but people can tend to live so much in the past that they’re reluctant to try new things,” he said. “People are opening their eyes to the talent that’s here in the community, though. And there are more opportunities for live music now, so we’re getting that right.

“We need to do better about generating excitement and support for our hometown talent. Just because somebody’s from Athens or Nashville doesn’t make them better; we’ve got world-class artists living and working right here who need our support.” 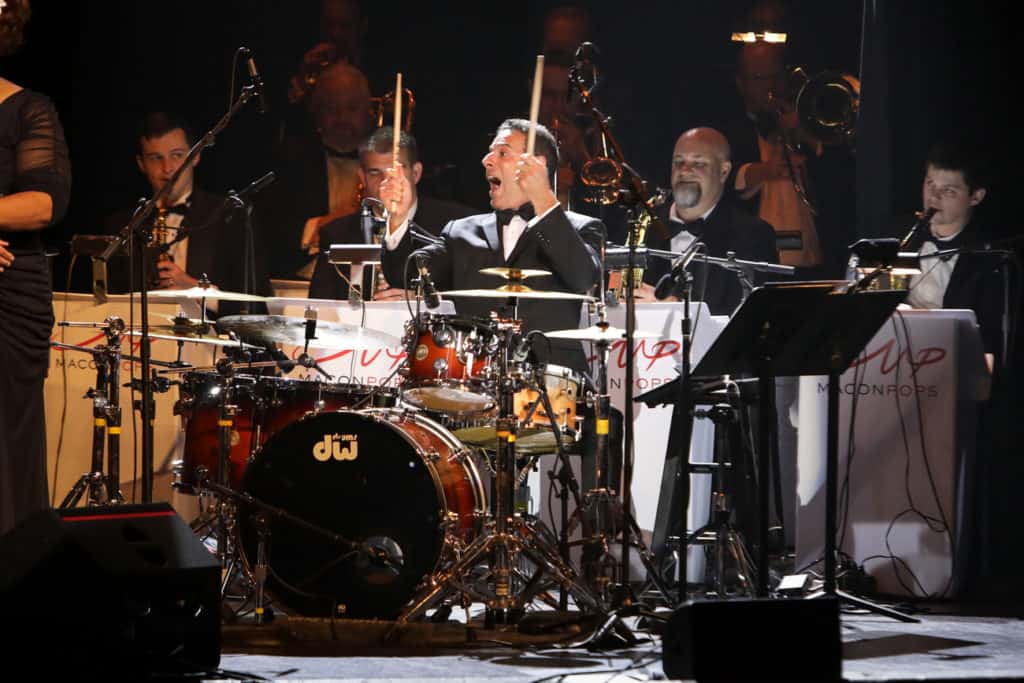 A two-time Grammy nominee and much-lauded percussionist, Moretti travels extensively to bring his performance talents to symphony orchestras across the country and beyond.

While home in Macon, Moretti had a vision of his ideal pops orchestra. For the uninitiated, a pops orchestra is basically just what it sounds like: popular music played by a traditional orchestra. Along with partner Matt Catingub, Moretti turned that dream into a reality. Macon Pops recently wrapped their sixth season, and they’re hard at work planning a seventh season full of innovation, creativity and genuine musical joy.

Macon Pops had the honor of performing to a crowd of nearly 10,000 people at the Main Street Christmas Light Show Extravaganza last year, a moment which Moretti lists as a top-five career achievement.

“It was so meaningful – looking out over the crowd, seeing the joy on everyone’s face, seeing people from all walks of life here in Macon be connected by hearing the local talent up there on that stage,” he said.

Last year, Moretti launched For the Love of Music, a campaign focused on music education in a practical, working sense. Students in music programs at local schools have the opportunity to attend a Pops rehearsal, where they see the band run the show and work out production in real time. They’re also invited to attend the evening performance for free. There’s a Q&A session where students are encouraged to ask questions about any aspect of the life of a working musician.

“We’re hoping we can be the spark of inspiration for somebody out there who’s not sure of their direction,” said Moretti. “We want to be reachable, tangible, attainable, and we want them to see the show come to life. We want them to see the quality of music that’s out there in their city. I really want students to take advantage of it! You have somebody who’s pretty high up the music-industry food chain that you have access to for free – ask me anything! Just because I’m in Macon doesn’t make me less awesome,” he said with a laugh.

In fact, Macon is getting some widespread recognition for the creativity and innovation of the Macon Pops.

“No one else is creating shows from scratch,” said Moretti. “Matt can write anything, and he takes that creative freedom and writes shows for the orchestra itself.” 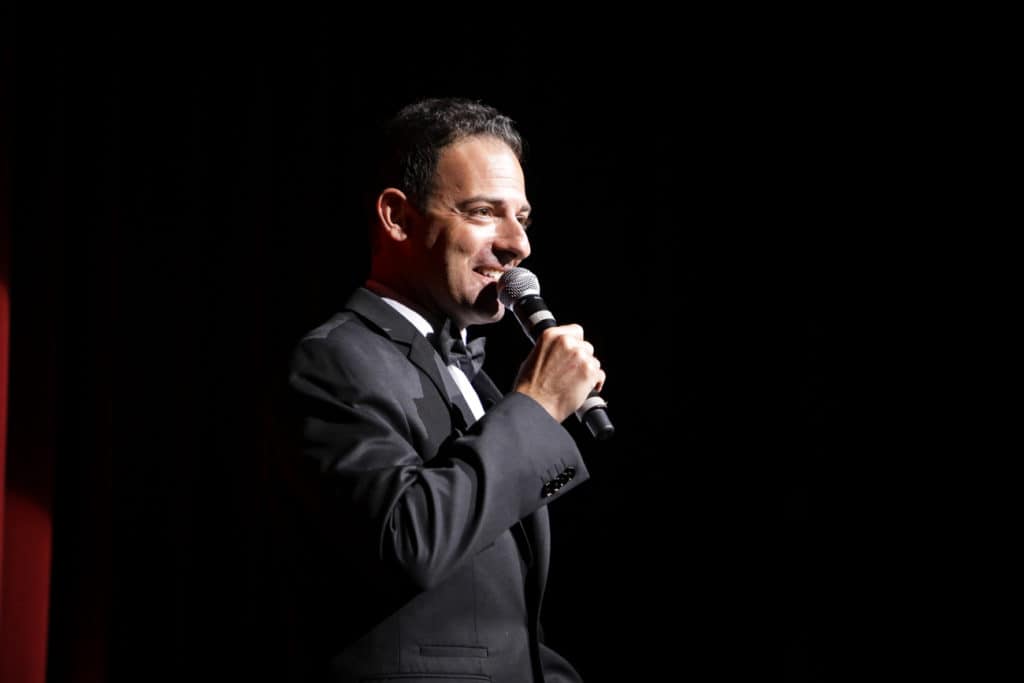 Because of the uniqueness of Macon Pops’ composition style, several of their shows have been picked up by other orchestras, so they’re putting Macon on the map – and freelance musicians nationwide are taking note, too.

“We have a waiting list of about 40 musicians who want to play with the Pops,” said Moretti. “A lot of times, Matt’s still writing stuff the day of the show – that keeps the energy and excitement flowing, and musicians respond to that. It’s creatively fulfilling, and there’s palpable passion behind it.”

Local reaction to the Macon Pops has been overwhelmingly positive. In promotional materials, the word “orchestra” is purposefully left out, because it can carry a connotation that scares some potential audience members away, which is the opposite of what Moretti wants.

“We filled a void here musically,” he said. “We proved you can have something high-quality and sophisticated, but at the same time completely accessible. I’m so happy when I look out into the audience and see kids, teenagers, grandmas, grandpas – there’s so much diversity, and we get to take them on a musical journey for two hours. It’s a privilege.”

In true visionary fashion, Moretti understands how to give proper accolades to our musical icons while simultaneously moving forward in new and unexpected directions. Not to give away too many secrets, but a Southern rock-themed performance is on deck for the Pops next season, and Macon is pulling out all the stops to honor our hometown heroes.

Macon Pops will be partnering with The Big House for a 50th anniversary celebration of Capricorn Records and the Allman Brothers. There’ll be a visual component featuring both still photos and video footage from the archives, and plenty of room on the dance floor.

Moretti and company are, as usual, interested in reaching out to folks who are Southern rock fans but might not ordinarily attend an orchestral performance. After all, he has worked tirelessly at building an audience of music aficionados who trust him and eagerly anticipate his next creative offering.

Now, our challenge as a city is to figure out how to build and sustain that kind of audience across the board for our working musicians in every genre.

“Do I think it is awesome as hell that Little Richard and the Allman Brothers are from here or did their thing here? Yes, 100 percent, absolutely! There’s no denying how cool and culturally significant that is,” said Denny Hanson wistfully from his perch outside a coffee shop downtown.

“But I feel like a lot of things about the Allman Brothers get missed and aren’t applied to musicians today. At the time, those were some weird cats! These long-haired hippie dope-smokin’ dudes rolled into sleepy ole Macon, Georgia, and we gave them a chance. For whatever reason, that doesn’t really happen now. We talk and talk and talk and talk about it all day long – the term I use is fetishization. Our musical history is fetishized.

“There’s so much music here – I don’t mean only literal bands, I mean the leaves that roll down Walnut Street in the fall, or the traffic on Poplar Street. There’s life here. People need to stop and listen. We have all this beauty around us, all the time.” 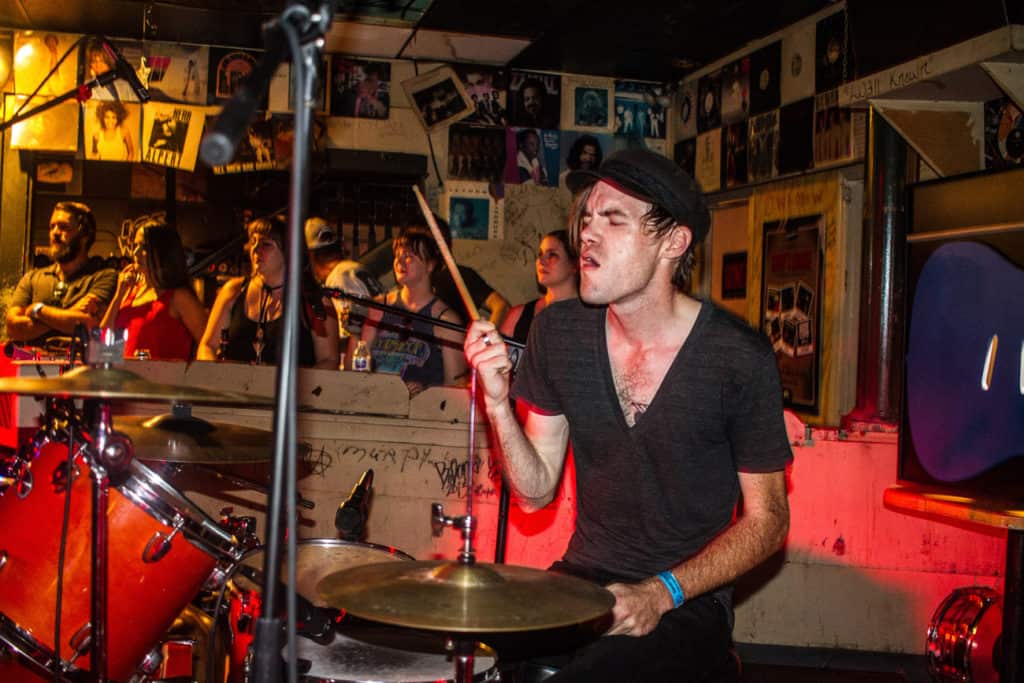 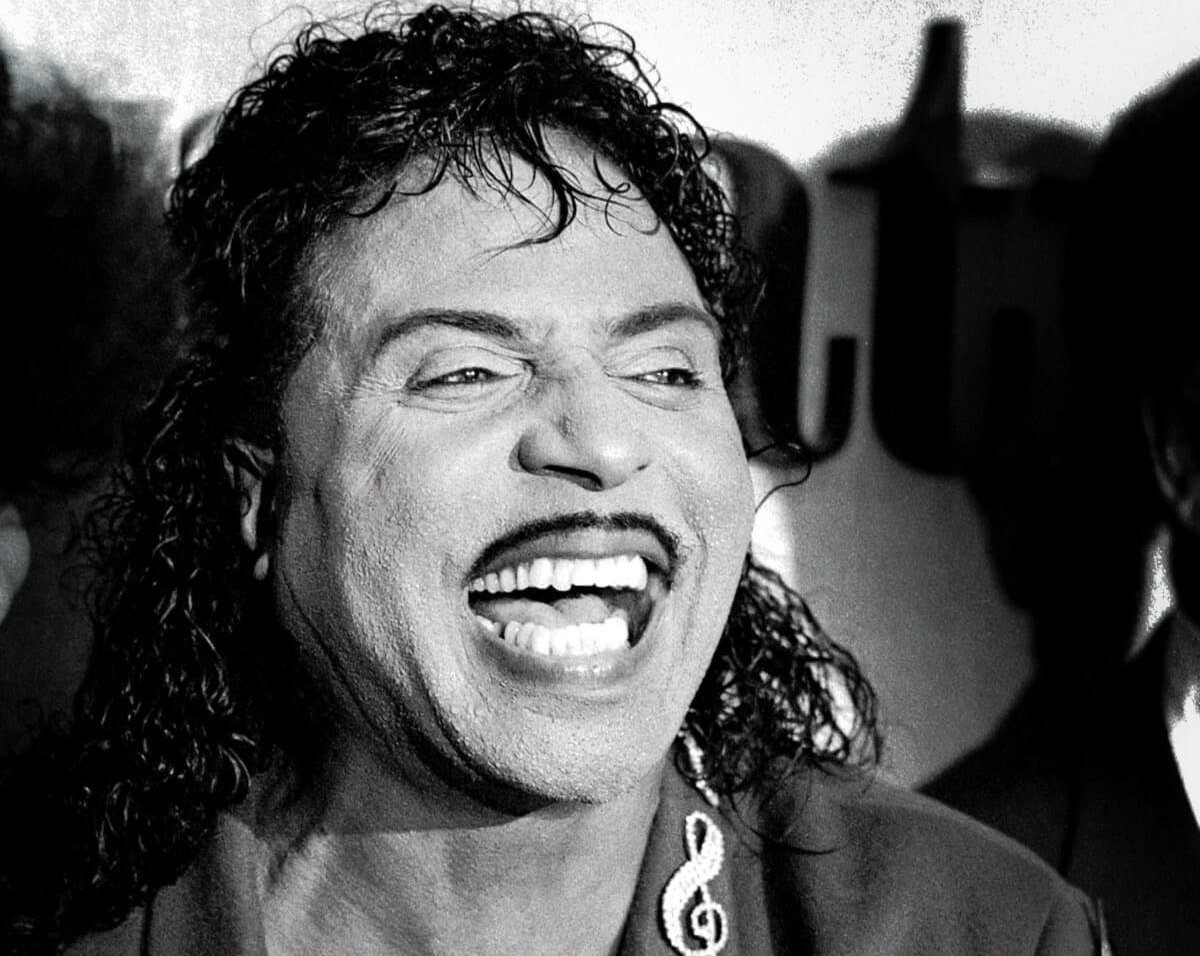 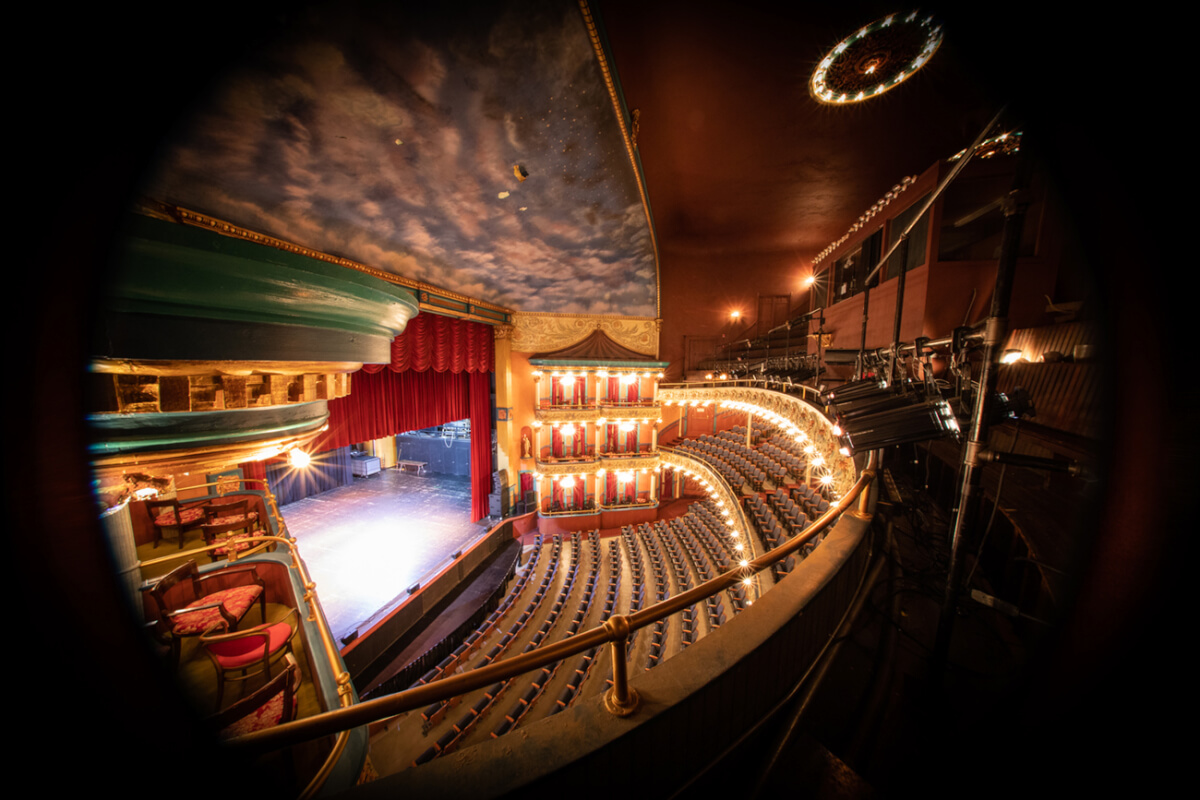 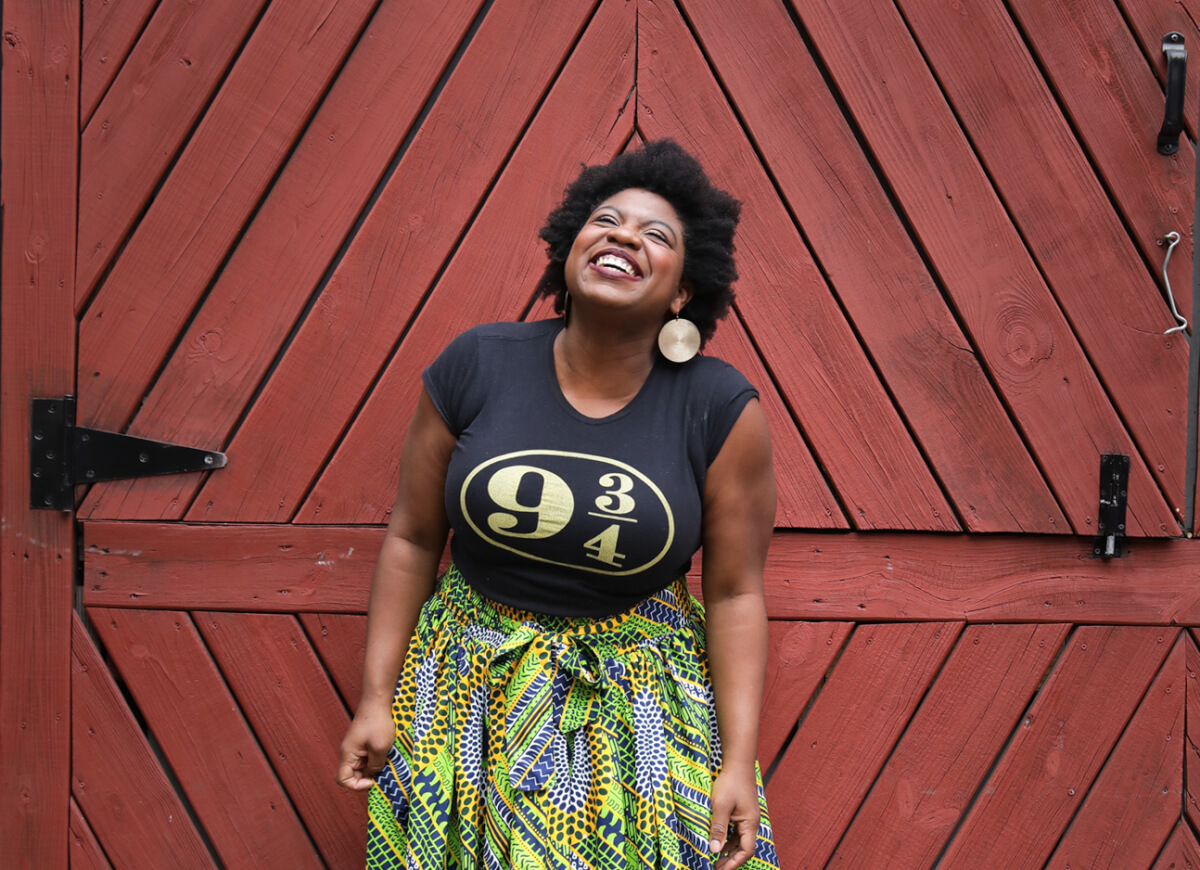 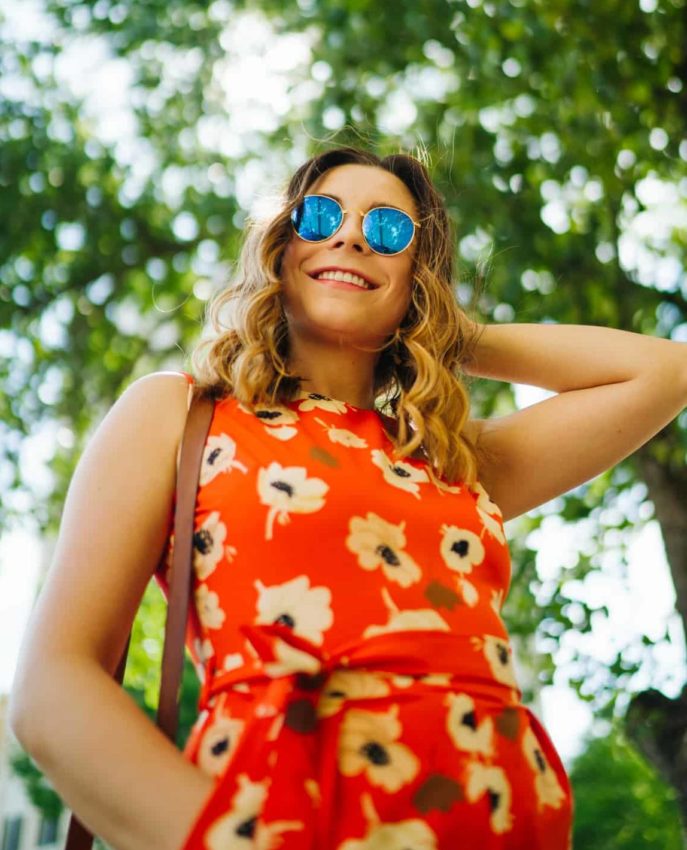 Style to Bragg About