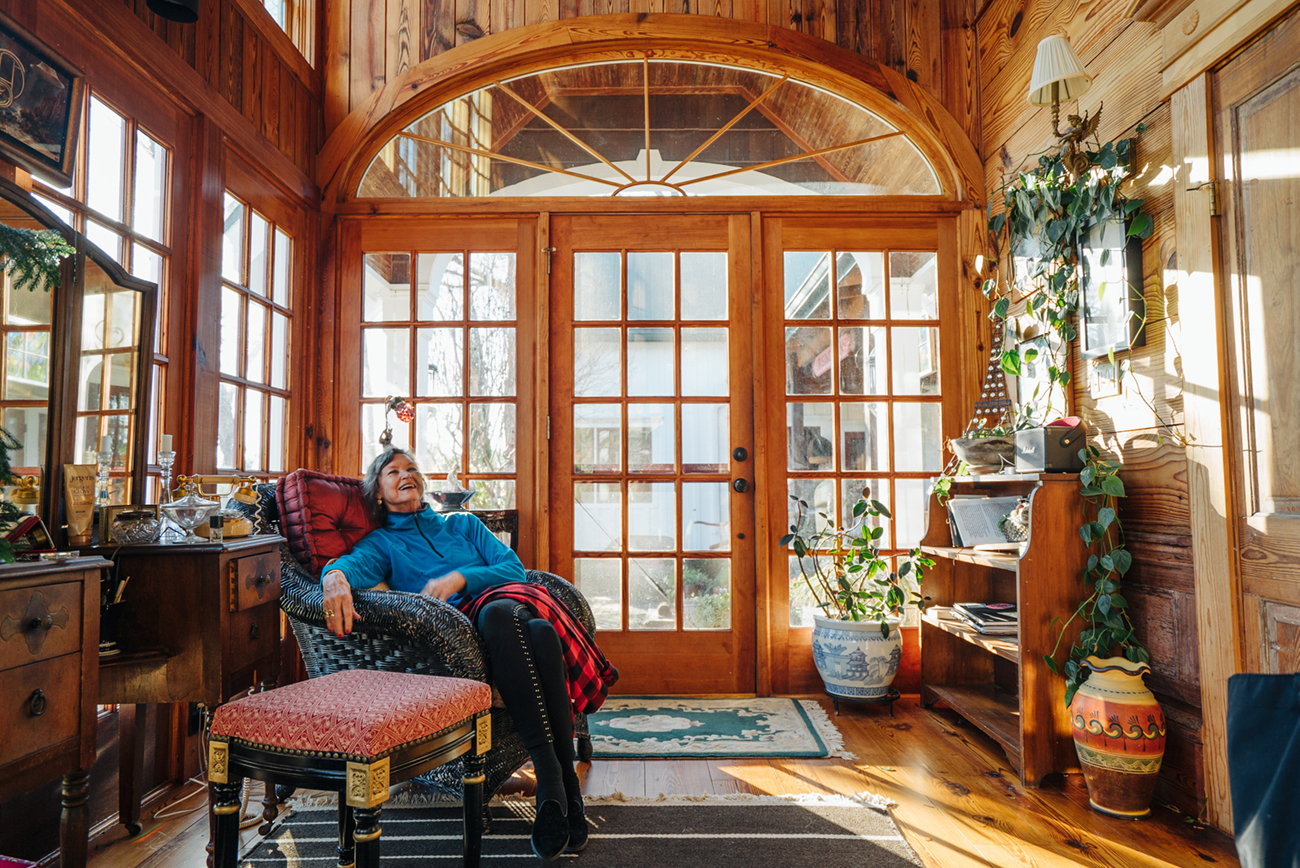 Rose Lane Leavell is a woman with strong, resilient Georgia roots. Her ancestors began working the land in Twiggs County in the 1790s, and in 1981, her grandmother passed away and left her the land that would become Charlane Plantation. In the early ‘70s, while working at Capricorn Records in its heyday, Rose Lane met a shy young musician named Chuck Leavell who played with the Allman Brothers. The two fell for each other quick, got married and Rose Lane set about gently indoctrinating her new husband into the bucolic, remote country world she’d grown up in.

Rose Lane studied fashion merchandising in college, and for 20 years owned and operated her own boutique, Cornucopia, on Second Street in downtown Macon. The shop was ahead of its time in style and hipness, and was the go-to shopping destination for eclectic fashionistas in the ‘70s and ‘80s. Despite that foray into entrepreneurship, the forest still called her home. “I always knew I’d live here,” Rose Lane says of Charlane Plantation – and she was right.

Despite the rigors of being on the road – Chuck Leavell currently tours with the Rolling Stones as their musical director, and Rose Lane is on the team that does the band’s makeup – the two have grown Charlane Plantation into an award-winning tree farm and hunting preserve, and have made a beautiful home for themselves there in the historic Bullard House, listed on the National Registry for Historic Places.

The cozy farmhouse was built around 1870 and has been renovated and expanded several times. Beautiful pine from Charlane’s forests has been used on the floors, ceilings and walls, and the home’s interior is a friendly, quirky, comfortable testament to the couple’s creative passions, devotion to family and friends, and deep love of the natural world. Let Rose Lane tell you about it in her own words.

Where did my name come from? A rose is a rose is a rose. I’m Rose Lane, my mother was Rosaline. Ashley Rose is my daughter, and somehow my other daughter got left out. Maybe because she was too bad – she went to Central and cut class 30 days. I never did cut – when you live in Twiggs County, there ain’t nowhere to go. 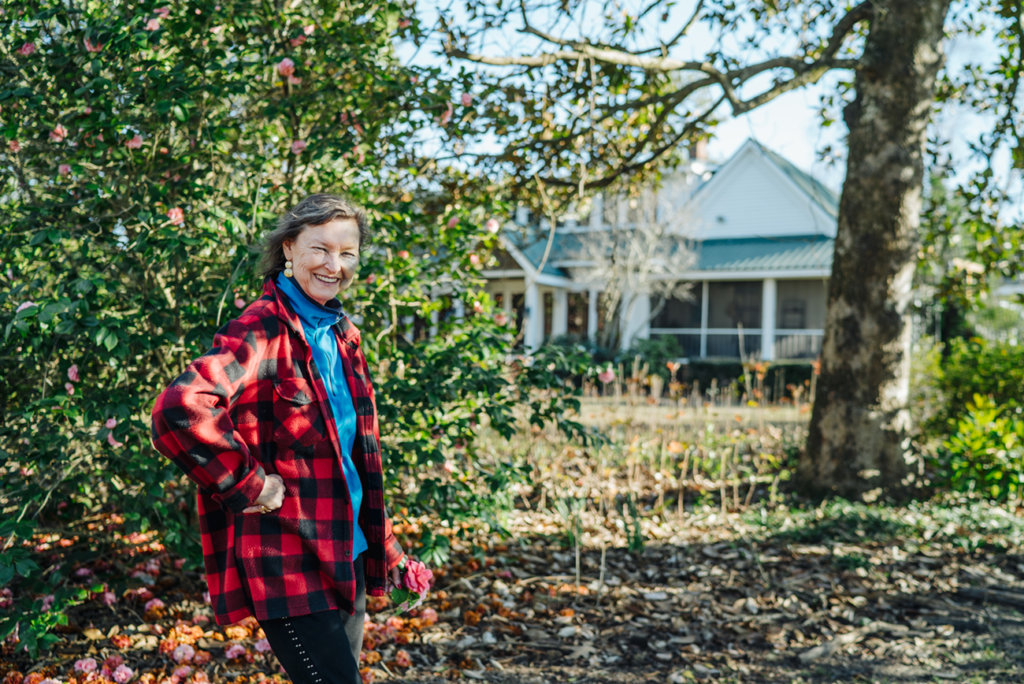 My grandfather planted all these camellias. Not my grandmother, my grandfather. When I was growing up, I thought it was my grandmother, but she didn’t give a shit about ‘em. They don’t last for very long, but they’re beautiful. Pink perfection! I like to bring in a little cluster, put them in a bowl. I love to have fresh flowers around when we’re here.

I’m having total moderation in the house right now. Everything’s in the attic, and we’re going to do the floors soon. This is what was known as a dogtrot house – this was the bedroom, and over there was the kitchen and dining area, and in between was this breezeway called a dogtrot. The dog would hang out there, because it was cooler, and it would stay out of the other rooms, I guess. It sounds silly, but it’s an older architectural style that’s getting popular again. We’re going to build a dogtrot house on our property about a mile from here.

We have lots of wine and booze from everybody who comes to visit. This Dom Perignon, I bet it’s been here forever.

Frida! Frida Kahlo. I love this painting. It cost me a lot of money. Ashley Longshore painted it – she’s my goddaughter. She and my daughter went to school together. They were truants together. Her mama put her in boarding school and I put Amy in boarding school, and that’s how we all met. She lives in New Orleans now. She’s an amazing artist. 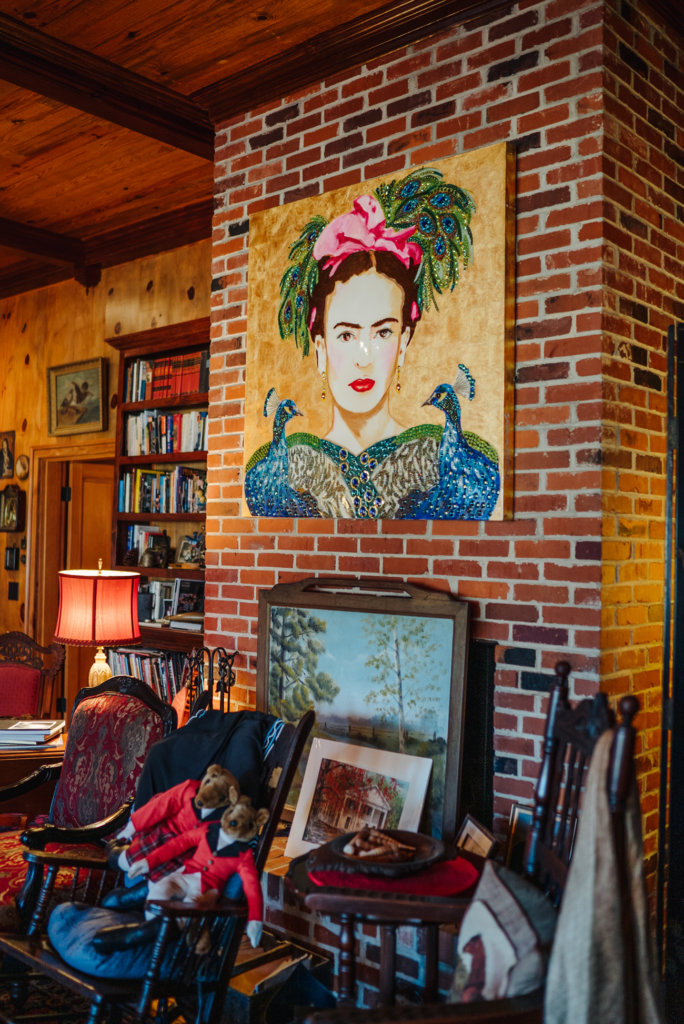 This chaise, Chuck gave it to me for a baby gift when I had my first child. This velvet sofa belonged to my Aunt Mary – she just passed away, and I had the sofa re-done. Everything here has a little story, doesn’t it? This bench came from Jerry’s Antiques down in Savannah – we have a house there and love to go stay when we can. I love Jerry, he gives me all the deals. 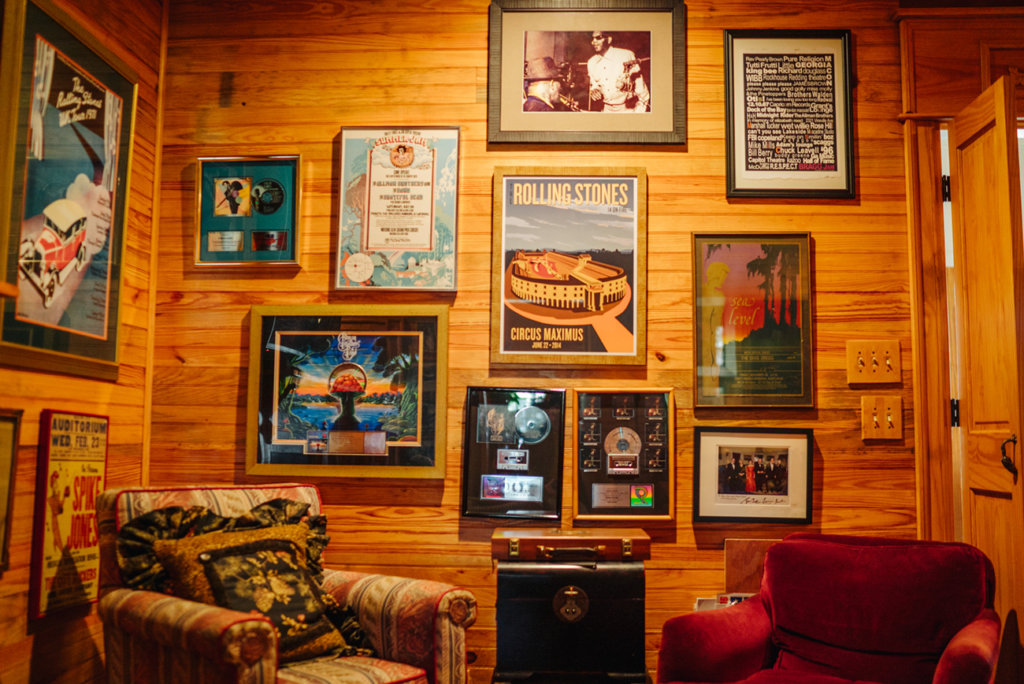 So many of these paintings are mine. The flowers, the trees, the camellias, the chair. That’s Chuck’s sister Judy. This is one of my first paintings – it’s the same interior that’s in the other room in here. 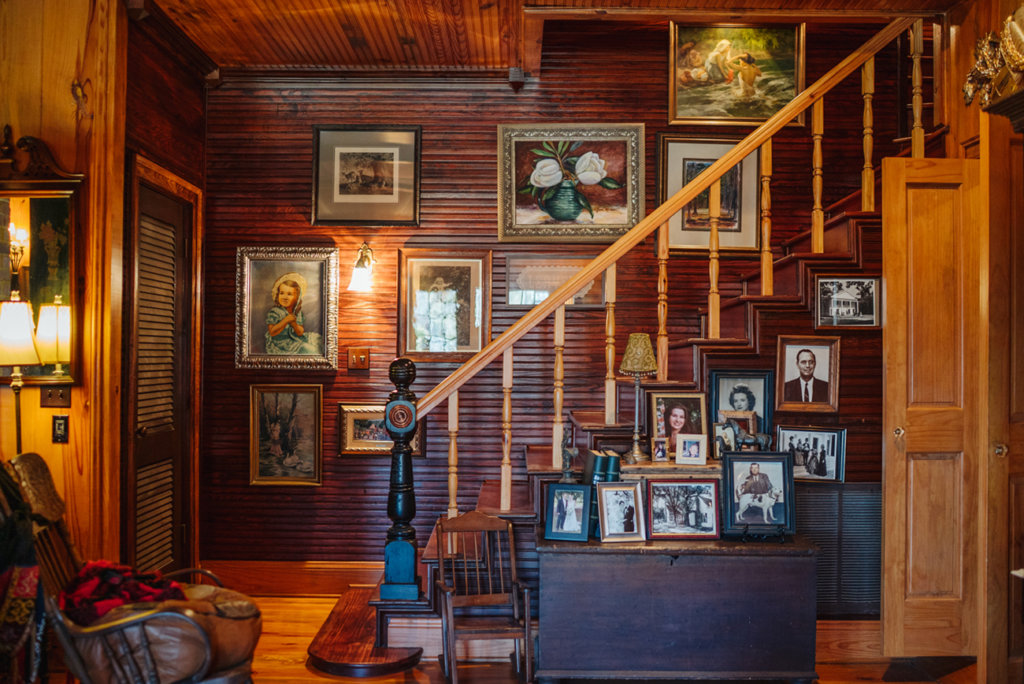 The light in this room is beautiful. I love it up here. I’m working on this painting [the one on the easel] for my brother now. He’s a farmer. When we were children, that barn stood across the dirt road. It was a white dirt road. I’ve got to do a little more spackling. I’m working from memory here. He told me I should do it, and I got really into it. I painted it just exactly the way it was. I haven’t gotten the cow down pat yet, though. 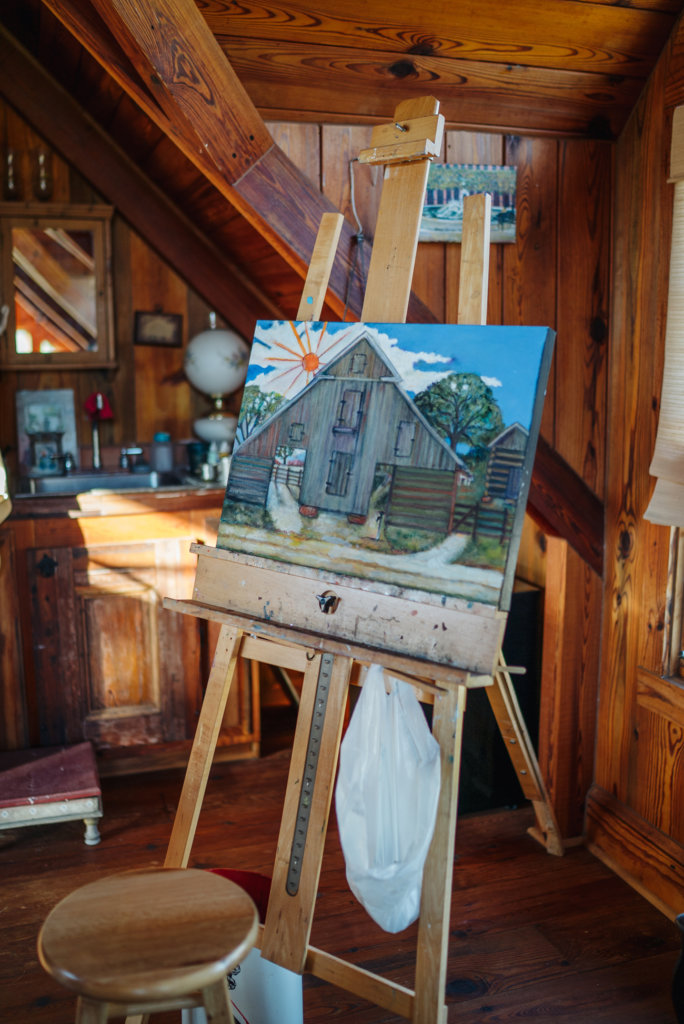 I would paint every single day, but I don’t stay home that much. I’m always on the road. Oil paints are my favorites, that’s what I love to do, and you just can’t travel with them. I do have watercolors and I can take them with me, so that’s something.

I take this sketchbook with me when I travel. I’m always doodling something in here. This is the house band. This is Holly Golightly. This is France, I think? There’s the Eiffel Tower, and there’s some fountain I was sitting near, also in France. I got real Frenchie when we were in France for a while. 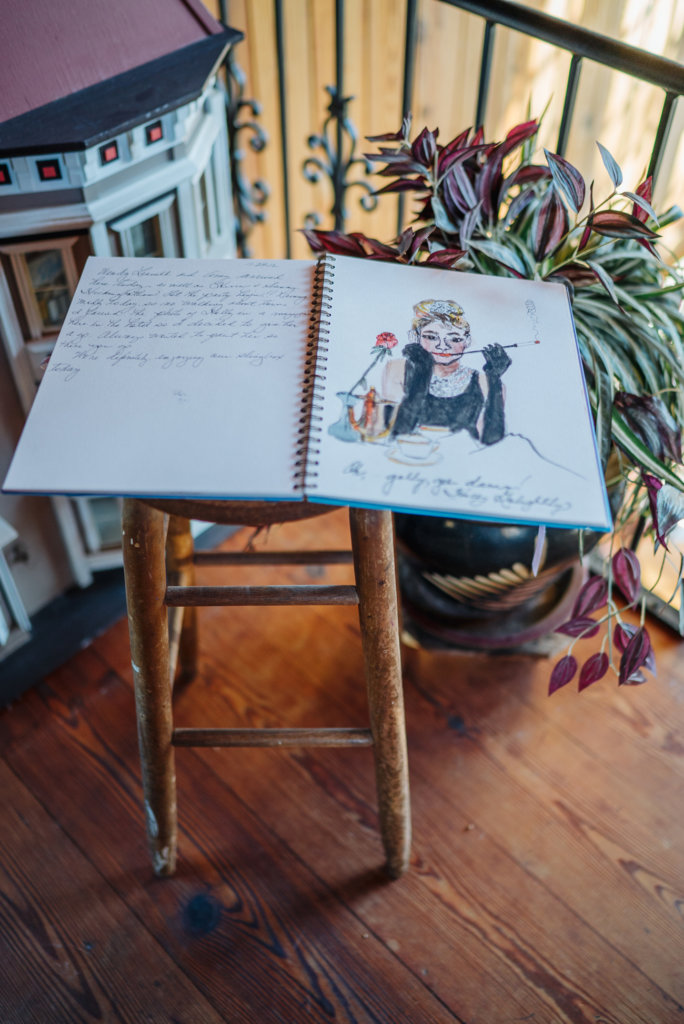 I have two studios – the other one’s in the horse barn, and I can go there and work on big projects I couldn’t do here. 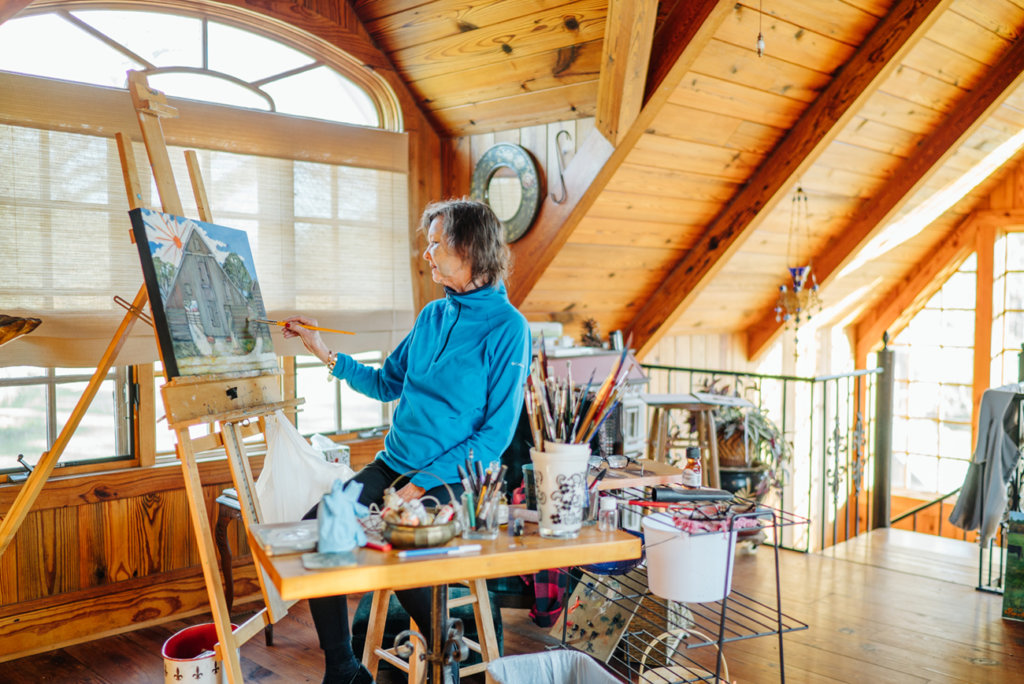 Cornucopia – that was my 20-year fashion romance. I bought five buildings in a row in Macon, but ultimately, we were gone too much. I was a mother and Chuck was on the road, mostly, during that time. I had au pairs to take the girls back and forth to school. But Chuck was on the road so much, we decided to shut it down. Do I miss it? No.

Now, I’m a matron because I own five buildings on Cherry Street. Me and Zelma, Otis’ wife – we were the matrons. Now in Macon, when you go down Poplar Street, there’s a whole new generation of buildings. Every time I go down there, I’m like, wow, really? The main drag is the same – the bank, the Rookery, all that – but everything else is changing so much, so fast.

My grandmother left me this. This is my house. I added on and added on and added on, here and there. I’m trashing the whole front of the house – well, not trashing, renovating, but it’ll look a mess for a year until it’s done. Chuck wants to build another lodge. We don’t run cattle – my grandmother did. She ran cattle and had about 150 when she died, they just roamed around everywhere. She had a pond back here, but it was teeny-tiny, so we put this one in when we were working on everything. It’s fully stocked; it has an island. 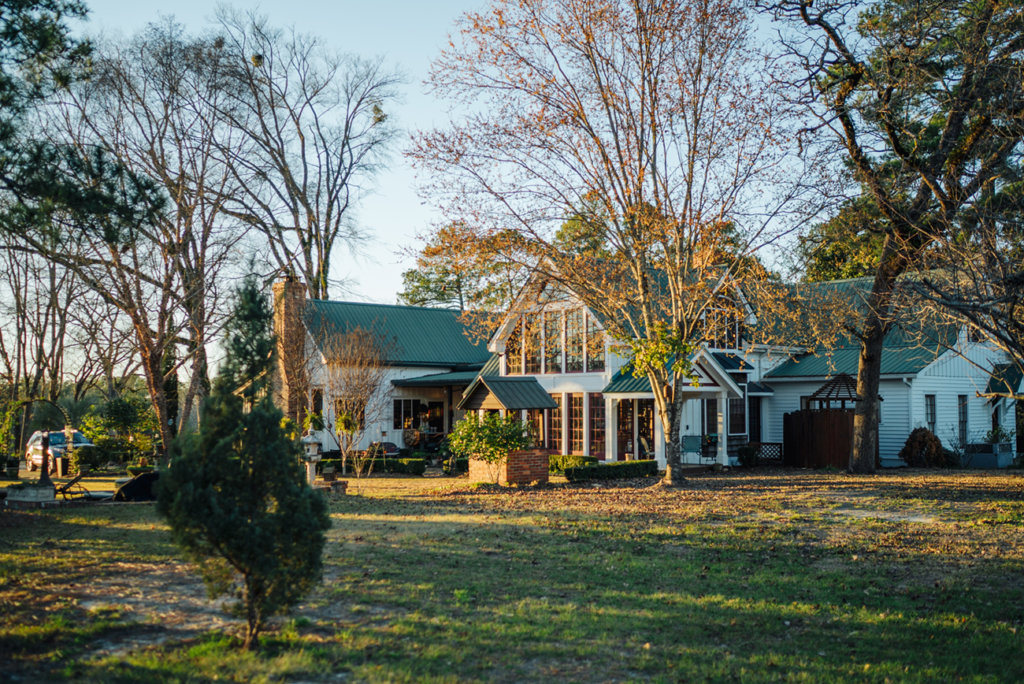 This is a good bathtub, a Jacuzzi bathtub with the jets and everything. And I hardly ever use it. Isn’t that the way it always is? If you don’t have one, though, you feel like you gotta have it.

This is our office. It’s a mess, but that’s what offices are for. Work. Work is messy. If you walk into someone’s office and it’s clean, I don’t trust it. 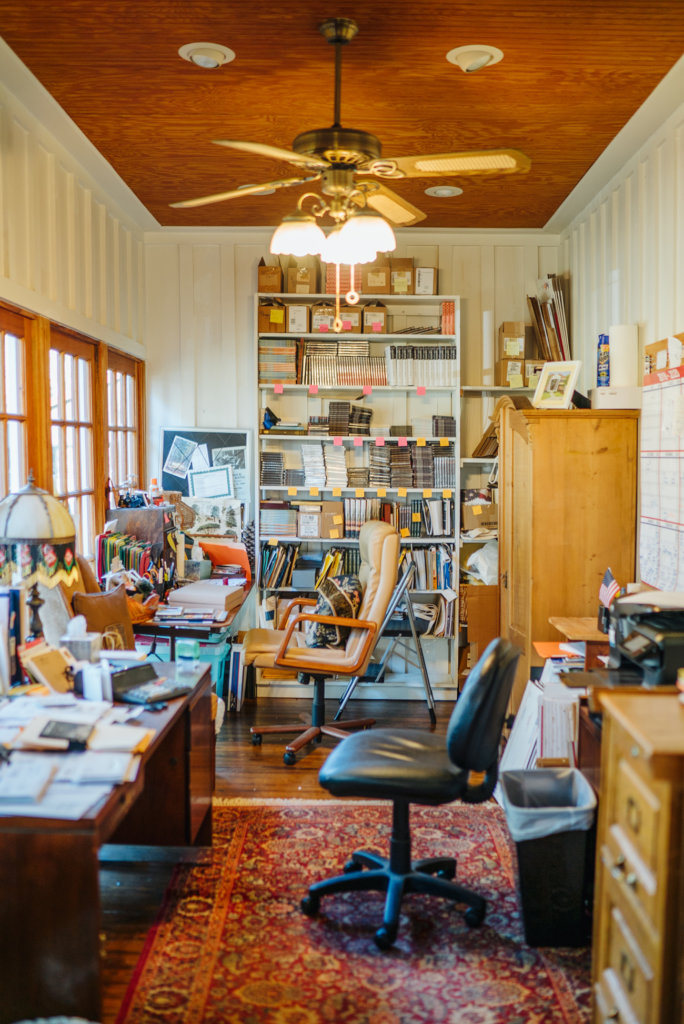 I’m a country girl, but I’ve done a lot of amazing things. I’ve been around the world. So much of that is because of the Rolling Stones. We’ve got a little traveling crew of about 140 people. I assist Caroline with hair and make-up. Isabel does wardrobe with her assistants. It gets crazy backstage, with the costume changes and everything. It’s chaotic. 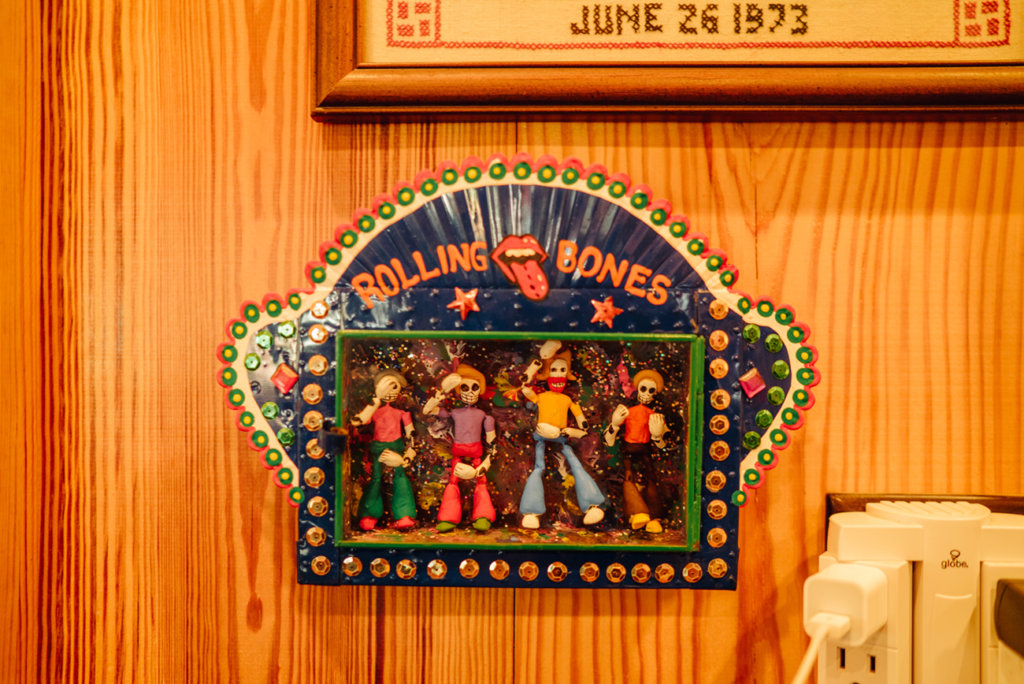 I’m a cooker, yes. I like to cook, I like to be in the kitchen. Tonight, we’re having filet mignon. I don’t like to cook big ol’ messy, sloppy steaks. I’m a lady! I like a petite, classy steak. 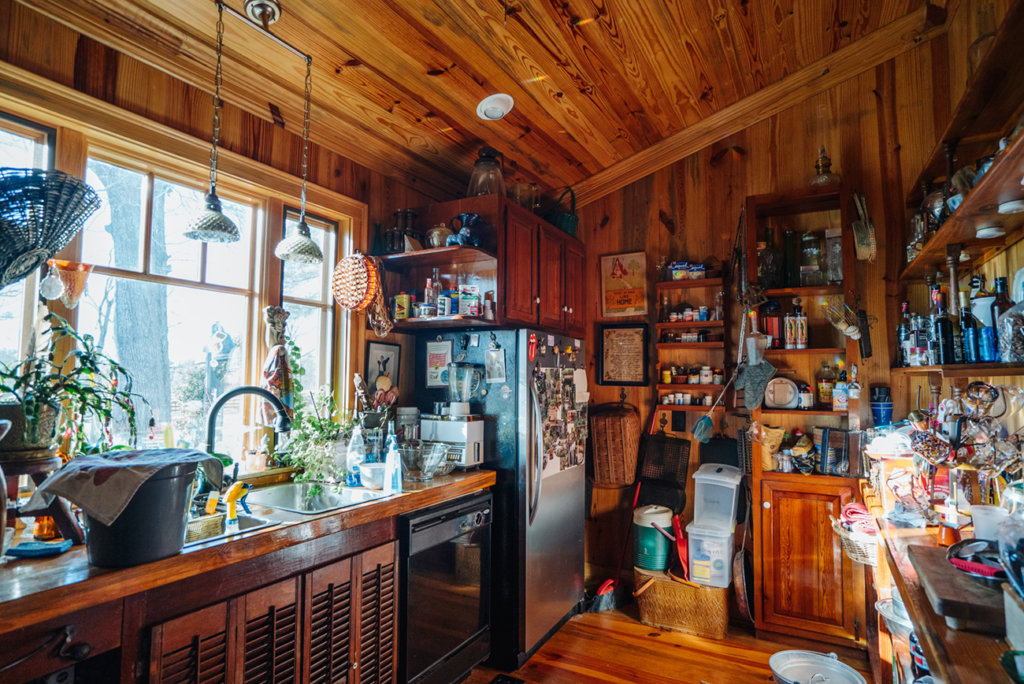 Those are Chuck’s hands. We had them cast. We also got a set of our hands together, of us holding hands – that’s in our house in Savannah. Get this – the woman who cast these was blind. She came to our house, of course she had someone to drive her, and cast our hands using this bucket of green slime. 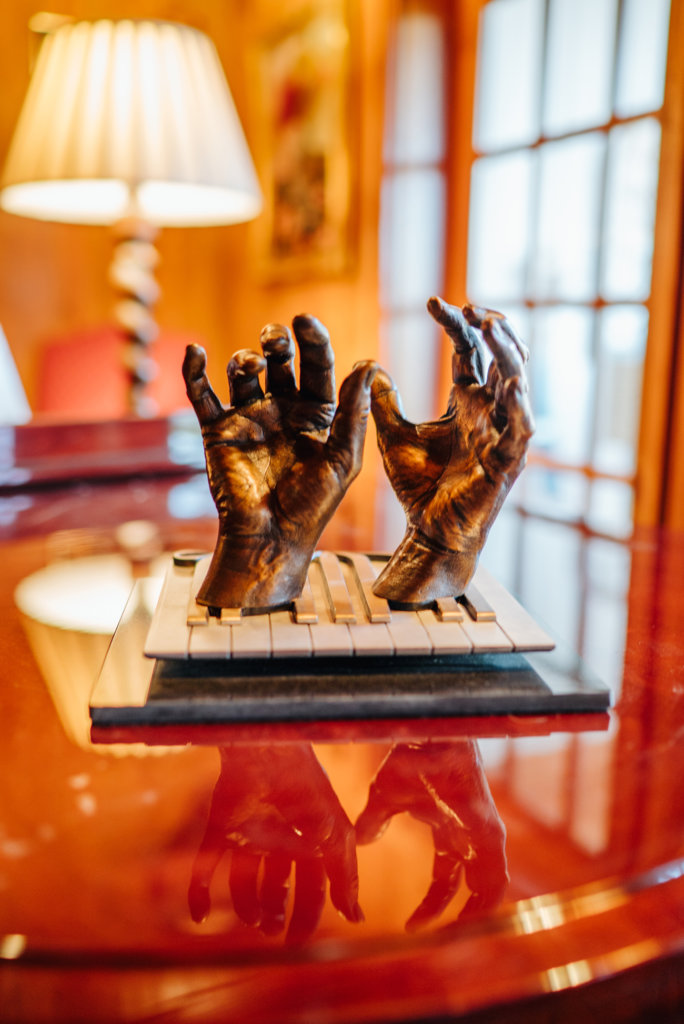 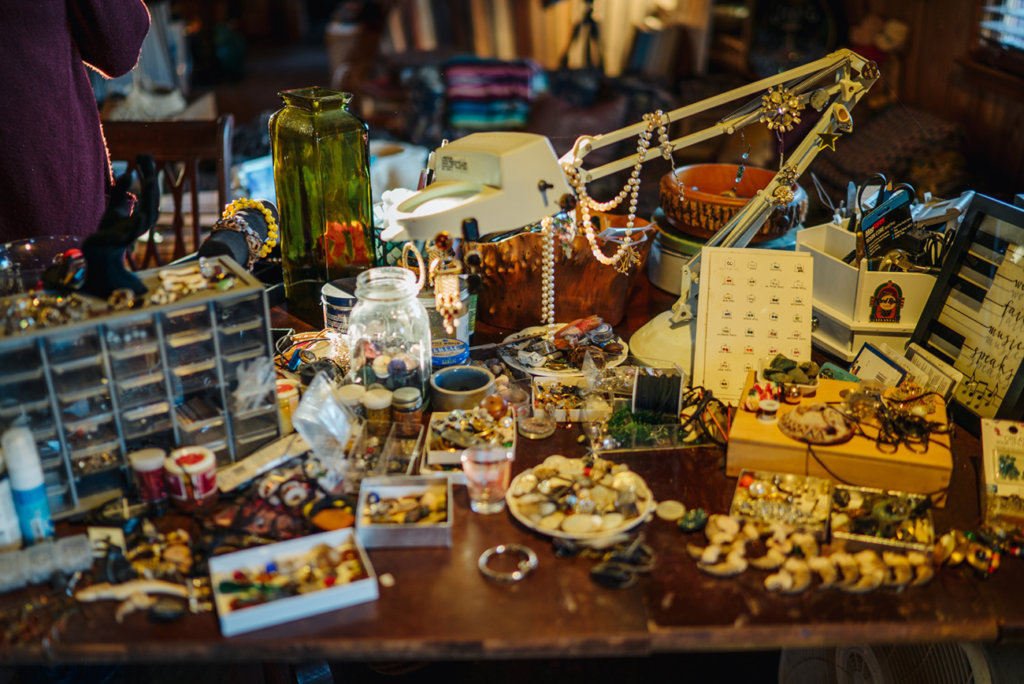 I love having a good porch – everything reverts back to the outdoors. This little screened-in porch is wonderful in summertime because you can be outside and not be covered in gnats and mosquitoes. You really need a screened-in porch in Georgia. 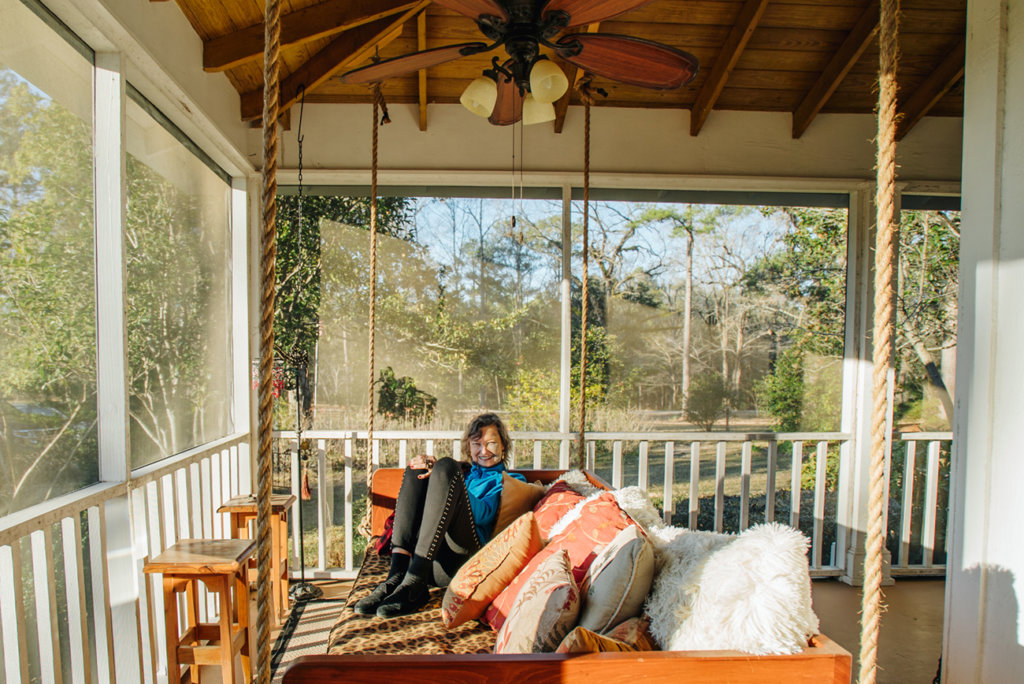 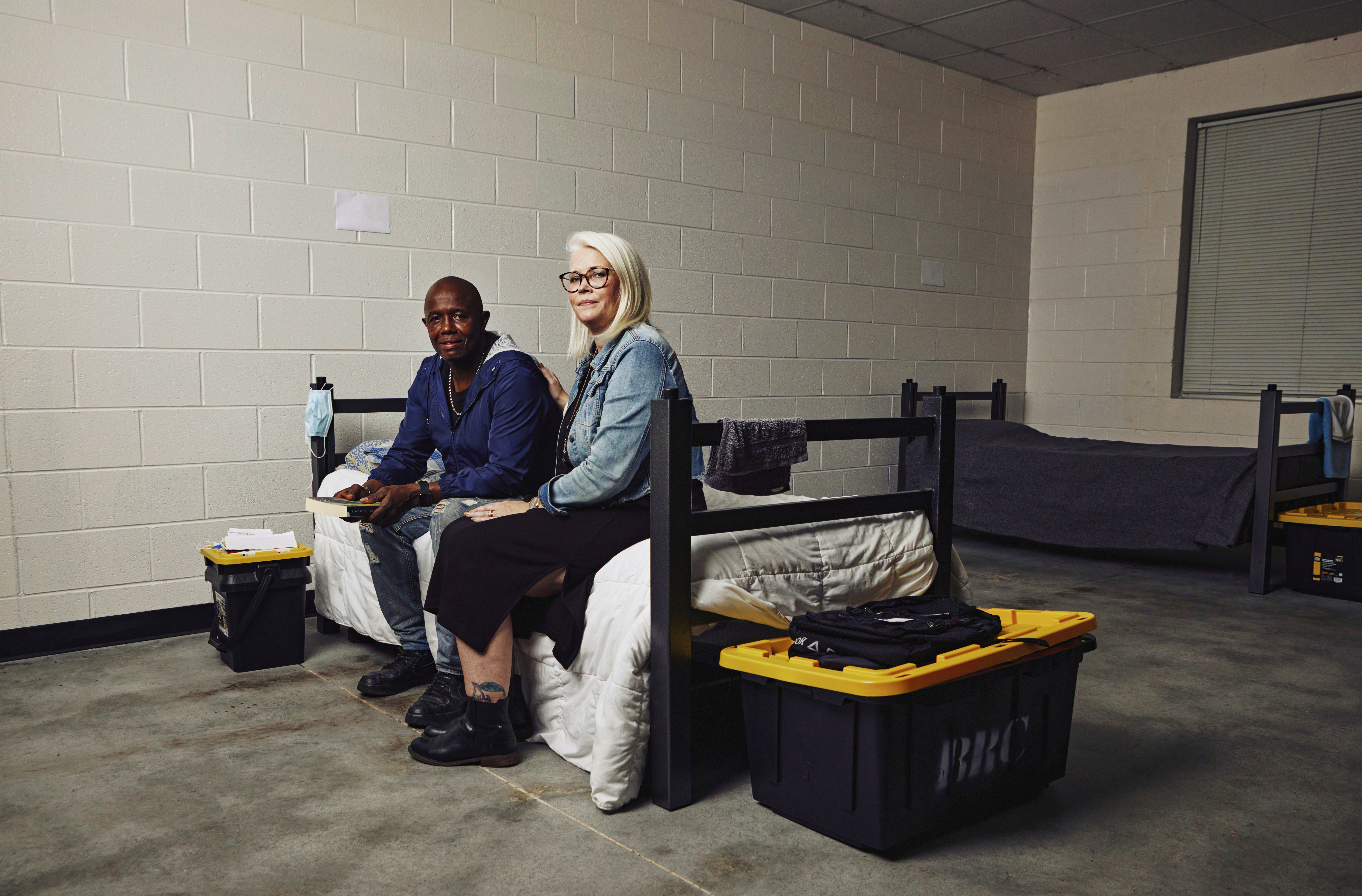 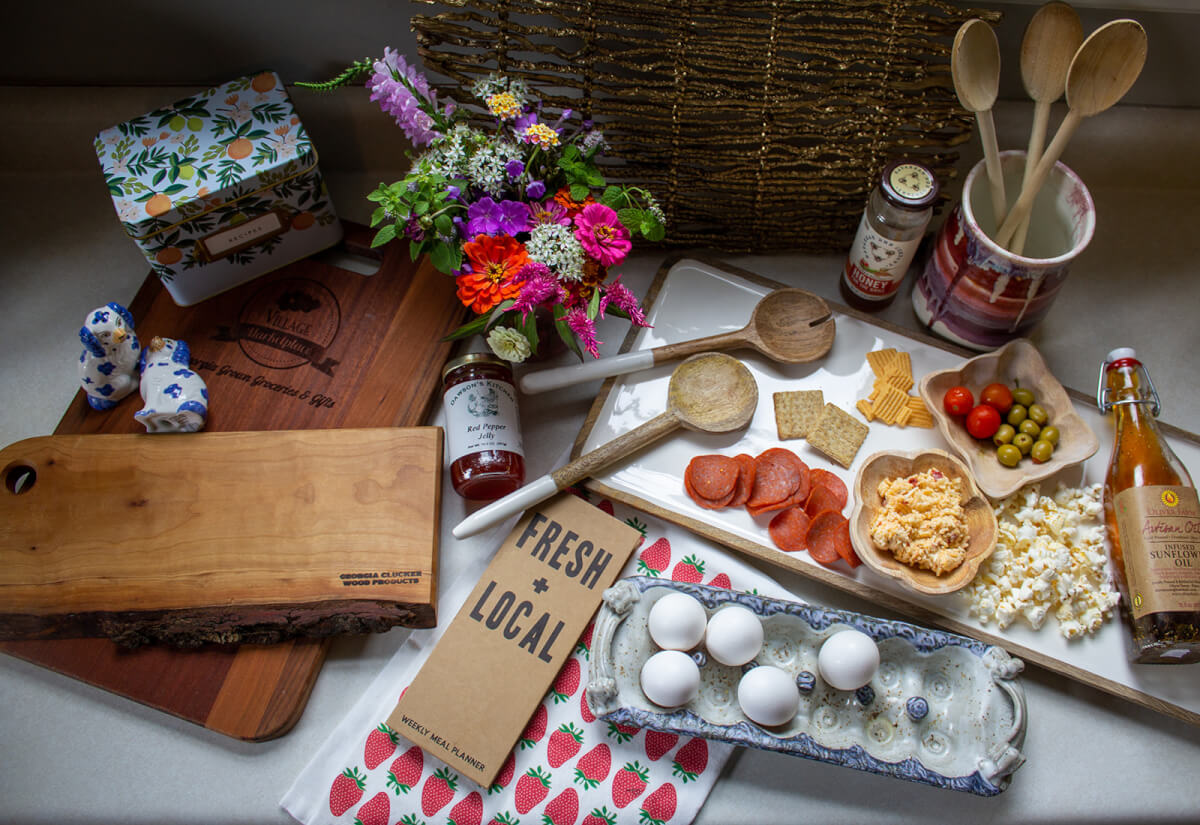 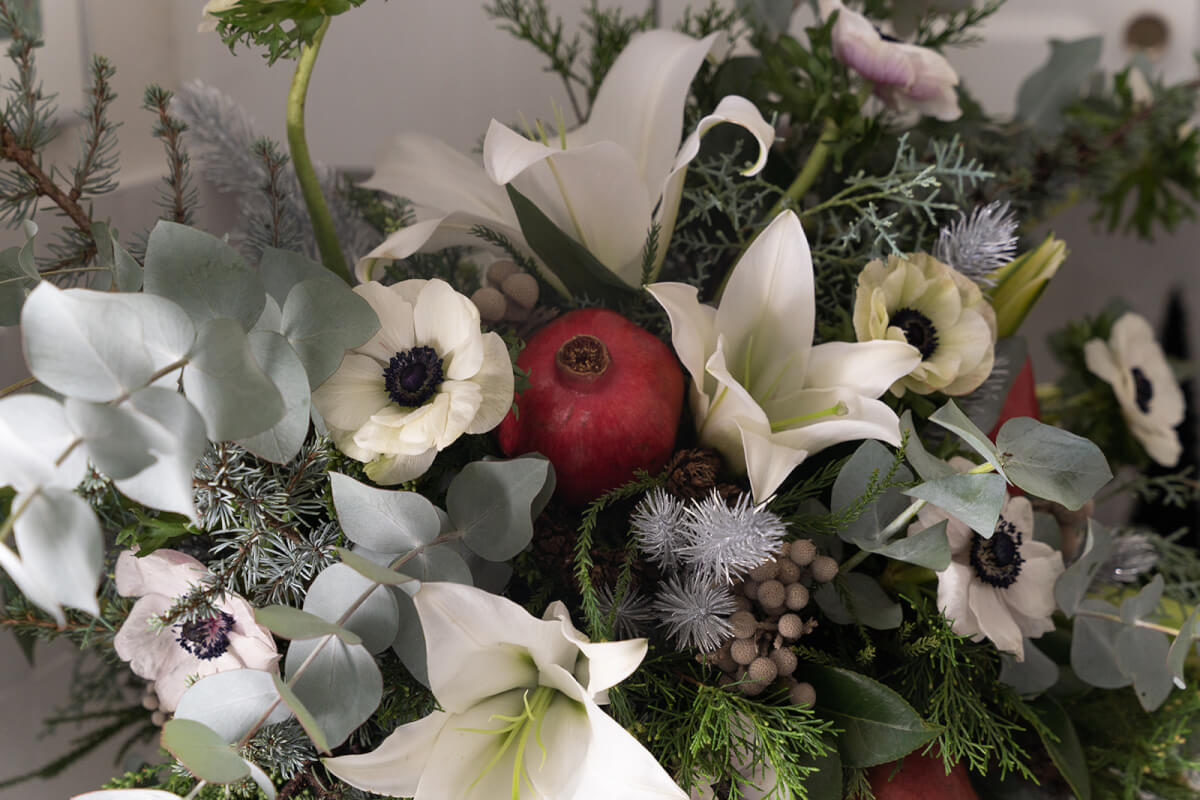 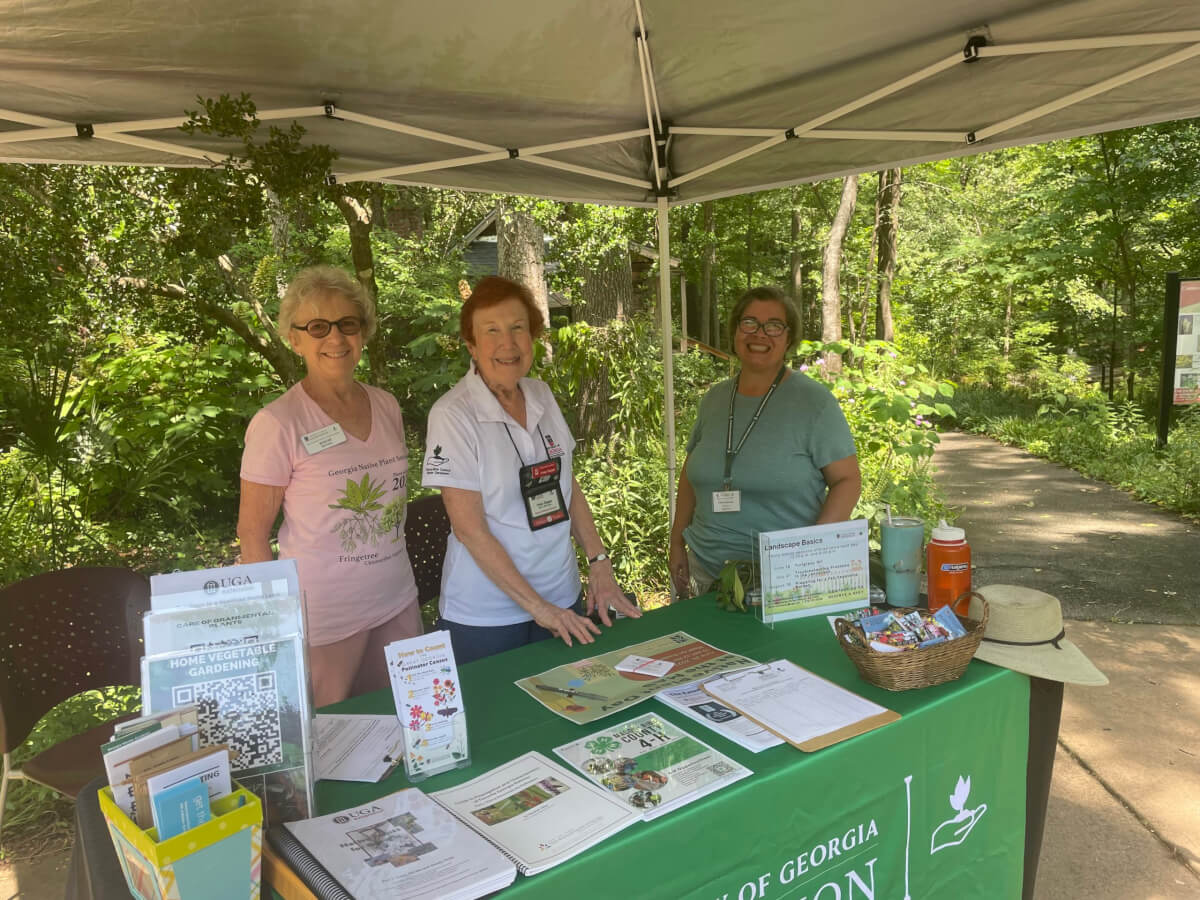